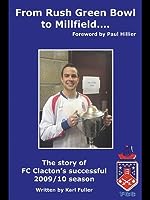 From Rush Green Bowl to Millfield...: The Story of FC Clactons Successful 2009/10 Season

Now Is The Time To Do What You Love: How To Make The Career Move That Will Change Your Life